Some of Disneyland's early walk-around characters were not so huggable, but by 1960 it looks like they figured out the key to capturing a faithful likeness. Pooh bear is covered in a thick plush fur that insulates him during the winter, and makes him extra squeezy. I like this version with the hunny pot on his head (and a hitchhiking bee). It's kind of neat that they had pooh out in the parking lot for folks to enjoy before they even set foot in the park (or maybe to wave goodbye as they headed home?). 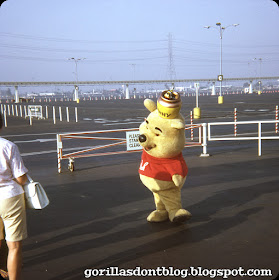 Since "Pinocchio" is probably my favorite Disney animated feature, I would have been very happy to see these two rascals - J. Worthington Foulfellow (aka "Honest John") and his mute flunky, Gideon. Honest John is sizing us up to see if we are likely candidates to send to Pleasure Island! 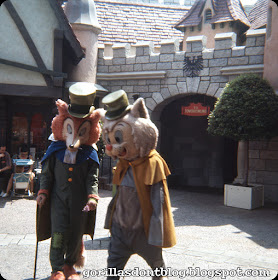