Today I am posting a series of slide scans from the Mysterious Benefactor; the photographer was aboard a Keel Boat in 1977 (these photos were taken for possible publicity use), so the perspective is pretty unusual. I can only think of a single slide in my collection taken on a Keel Boat.

What do you call the guy who mans the controls? The rudder man? The pilot? The cap'n or skipper? I'm going to call him "Fred" until further notice. Fred is good at his job, and he likes it.

Our fellow passengers are in all six photos - a nice lady with a camera who doesn't seem to ever take any pictures, and a young lady who may or may not be related. You decide. Camera Lady sports a rather plain badge that lets everyone know that she is a guest. 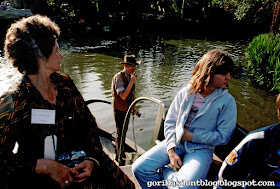 Whoa, this one got really dark. We can just barely see some rocks from Tom Sawyer Island, and the ghostly white shirt of a gentleman. 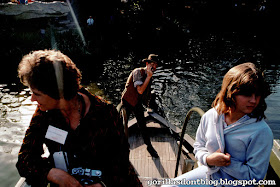 It's so strange to see the Hungry Bear restaurant in the distance, since it absent in so many hundreds of my own slides. I like eating there for its proximity to the river and the great views - or at least I used to. Any idea what that tags worn by the lady and the girl were for? Was it a sort of passport? 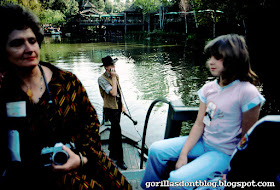 I've only heard a single live recording of a Keel Boat spiel, and the cap'n was pretty jokey on that occasion. I assume that this attraction was probably serious in the early days, and the jokes were added later, much like the Jungle Cruise. I believe that Fred is pointing (with one finger!) toward the Friendly Indian Village at this point; other theories are welcome. 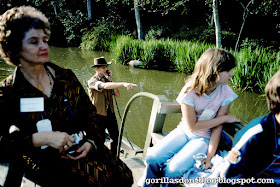 Oh man, we've rounded the bend, and now the sun is in our eyes. From this angle we can see the distant meese along the shore; he's in the water because meese breathe through gills. I learned that on Animal Planet. 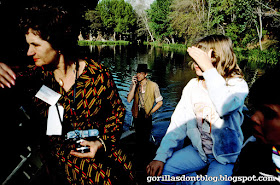 We miss you, Keel Boats!